Long time iOS developer, but never actually tried anything in Android world. Though I Worked on the cross-platform stack and tried out Android Studio before but never tried to learn Android Native Development. Always I hear about Android X, app compatibility and Gradle build from my colleagues. Even I went into a rabbit hole of upgrading React Native version and stuck because It’s breaking the whole project due to the need for AndroidX support.

Last May, when everyone was under lockdown and I saw a tweet about #30DaysOfKotlin. It’s an online Bootcamp program which teaches Kotlin and Android Native development with a series of Offical tutorials (called Codelabs) and webinar from Google. I registered immediately. Then days passed I never got the chance to go through the code labs but watched the first live stream webinar and which got me some interest about Kotlin because of the similarity between Swift and Kotlin. Then I went through the code labs for “Kotlin for Beginners” and “Android Kotlin fundamentals”.

As part of the program, I had to develop something on Kotlin and submit before June 6th 2020. Since all the modern apps are pretty much JSON viewer with better UX. I decided to build an app which consumes some sort of REST web service and build a minimal but functional app in the given time.

DevCast - A developer-focused podcast app which is using Offical APIs from dev.to. It has two screens, one to list the recent episodes and one for more details. The whole project itself open sourced and can be found here. Project is released under MIT License so you can do anything with it.

Here is the screenshots of the app. It has two screens, where first screen lists all the latest episodes from differnet podcast and second screen show the details of the selected episode. 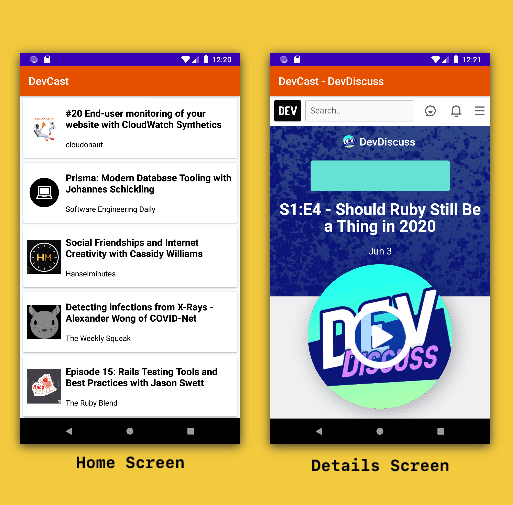 These are some links where I learnt most about Kotlin and Android Native development. Incase if you would like to start your journey like me.